skip to main | skip to sidebar

If you find this blog interesting, why not try out Web Raid yourself? It's free, it's available for Windows and Mac OS X (probably also runs well under Linux). Just click here to enter Web Raid's homepage with all information + download option.

The impossible has happened...

It's the first time I ever see it, months after implementing it (and it works immediately, I'm so proud :-) ).

You get this dialog when walking down from one level to the other. If you've played the game you may have the impression that every level has exactly one level below. This is not really the case. Actually, every level can have a number of levels below it; all stairs down lead into "virtual/invisible crawlways" that in turn lead down into one of a number of levels below. While you're in a crawlway you can look down into the levels and decide which of them you want to take. This is what this dialog is for.

Now the problem is that while Web Raid is crawling a site and building a dungeon, you have to wait. Therefore, right now, Web Raid's dungeons always have exactly ten levels. And by default Web Raid digs down into the site until it hits a page with no new pages below and only then keeps adding a second "child level" below a level.

And since about all sites have a hierarchy deeper than 10 levels, you nearly never see this dialog that helps you select your favorite level below. But it's there. Maybe you find it as well :-)

What a level (Wikipedia -> Mayonnaise)!

This level holds the most amazing sword (masterful light green-yellow longsword) I've ever had. Result:

It was only level 15, but masterfully crafted, giving it a skill factor of 260%, thus making it equal to a normal level 39 sword (!). And so I sliced my way through the levels, astonished when a a monster survived the first hit, and managed to get the rightmost achievement in "multiple total clearances", something I was sure nobody ever could do when I developed the scale. Oh well.
Mayonnaise rules :-)
Eingestellt von agsteiner um 09:55 Keine Kommentare:

this time I spent a bit more time in testing the game, and thus finding nice demo levels that you can start with (but you can always hit "anything else" and play a random Wikipedia page, or use Jump Gates to move to other places).

Of course the web changes continuously, so you can't really say what a level will look like tomorrow, but, well, today, here's some of my favorites.

My favorite level so far is "Pulp Fiction". It has a few really mean spots:

In Level 1, you're being followed by a mean lv. 19 water dragon right from the scratch. Fortunately it can be trapped by two monsters that just want to hang around piecefully: 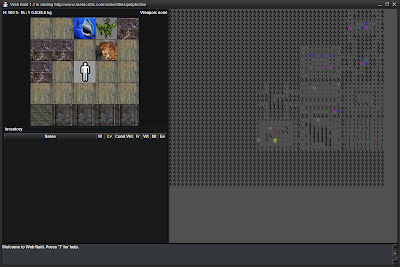 The dragon, caught...
Level 2 starts with a similar trap you need to avoid. Typically you go down from level 1 to level 2 with plenty of armor, being close to overweight. In level 2 you see pretty poor armor right to your starting position. But you need to pick it up before that Lv 15 Glowfly with Teeth does, und turns from a nuisance to a nuisance with a lv 16 sword and lv 11 armor, killing you almost certainly.
Thus: pick them up + destroy them with x.
Later you'll find one of the "mysterious" pieces of weaponry in this level. What does it do? Not too much, actually. Normally, every creature that is lv 12 or above will have some intelligence in assessing how strong you are. If you wield a very strong weapon, chances are that a monster won't attack you, or even flee from you. Once you've picked up this mystic weapon, no monster will have this kind of intelligence anymore. 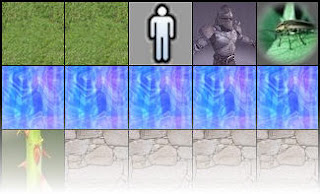 The Glowfly (right), eating itself through weapons and armor.
Level 3 is actually fairly simple. I'm only spending enough time there to get that lv18 "light tea green armor".
Same holds for Level 4.
Level 5 starts out mean. I actually didn't know that Web Raid acts like that :-). Go down and before you can do anything, two monsters that sit immediately next to you will attack you. Thank god both are only lv 14 and obviously unarmed, but if you enter level 5 without strong armor, you're dead the instant you see the level. 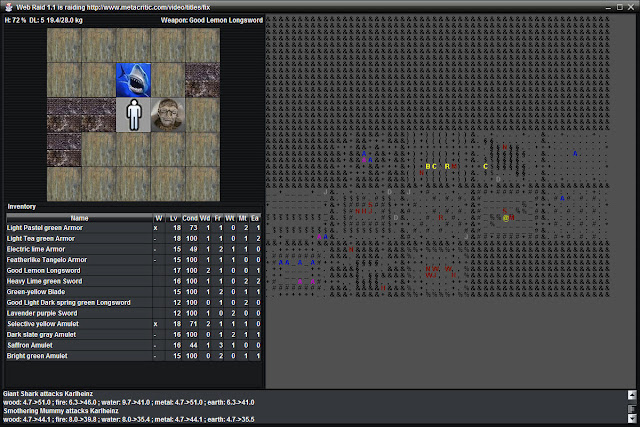 I survived :-)
And here's my current "Web Raid 1.1" achievements - nothing too spectacular so far:
multi kill Many (630)

How hard is a level?

When playing the new 5x5 levels today I noticed that it's really quite simple to find out whether a level is fun or not: If you count the armor+amulets in a level and compare that to the number of monsters, then typically

Maybe I should take this into account when selecting levels while parsing the web pages...
Eingestellt von agsteiner um 04:58 Keine Kommentare:

Well, whatever strange mess of hindi and other Indian languages messed up Web Raid is undone now again at Wikipedia's page about Mumbai; unfortunately before I could track down what exactly goes wrong.

I'm in the middle of the game, raiding "Tythe". The screen looks like this now: 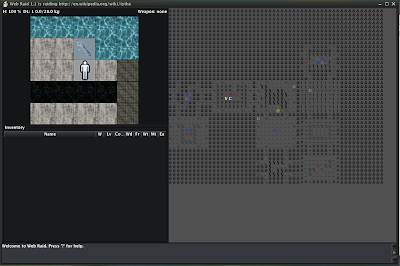 The 5x5 mini-levels show quite clearly. So let's start raiding by taking the sword in the north.
And dead already. I took the sword, I took a piece of armor, and they came after me in masses. And although I've designed the 5x5 levels on purpose with two possible connections in each direction, so you can run between two levels in circles, thus gathering your "followers" behind you, they came in so many waves that... Well...
Next attempt.
And dead again. This time I actually equipped sword and armor and tried to confront the first monster. Without success...
Next attempt.
This time I'm trying the good old "up/down" trick. I wanted to fix this for a long time (if you climb up, you magically are teleported to the next "up" stair instead of ending up at the stair which you were using to climb down), but this is a real life-saver so often that it just makes sense to leave it in.

But it was a good idea.

In the next attempt I actually managed to move across the whole level to the leftmost mini-level that contained really good weaponry and armor. But at that time they (THEY) were so close already that I didn't have the time to put on my belongings.

Next attempt. And I'm in deep shit again. 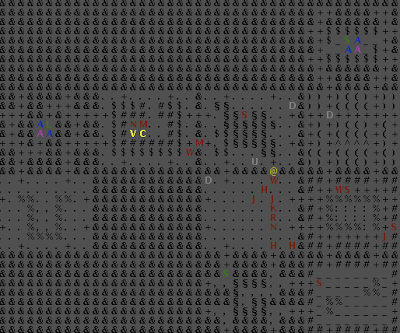 I'm the little yellow guy with all the red guys following him. I'd either like to go left, but there are already a couple of guys following me, or right, but only the two bottom-most mini-levels are connected to the right, not the one I'm entering. Also the stair down north of me is so close that if I enter and climb back, the stair up will be immediately next to one of the monsters on my track, making matters no easier.
...
Next attempt (after actually making it all the way to the west again, putting on a good armor and an amulet, wielding a lv 20 weapon (that turned out to be a poor weapon with weapon smith skill of 37%). I confronted a measly lv 17 monster and was killed.
So, it looks like either Tythe is much harder if converted to a 5x5 level than it is when converted to a maze. This might be a coincidence, but it might simply be the case that the pre-defined 25 mini-levels feature too many monsters.
Eingestellt von agsteiner um 05:03 Keine Kommentare:

Okay. My first game that consists only of the new kind of level. I enter my previously favorite level "tythe" (Wikipedia); at least the monsters there are not too hard.
... And I get a Java exception immediately... This doesn't happen with other levels. The culprit is a level below tythe that is created from the en.wikipedia.org/wiki/Mumbai which apparently only has a single english word, "an" (but you can see plenty of English in Firefox...). Do the hindi characters in there mess up the game?
Eingestellt von agsteiner um 12:58 Keine Kommentare:

The problem now is that I've collected plenty of items and managed to clear three levels, probably more than I ever did before. Should I hunt for that beaver and risk all my achievements? I don't know. Probably I'll chicken out :-).

Monster will probably be one of the demo levels of the next version of Web Raid.

Update:
I chickened out.